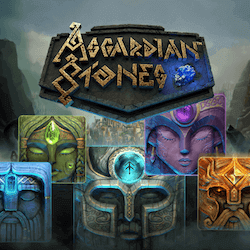 NetEnt has recently secured an incredible deal where they will be producing an online pokie based on the film Jumanji. The film has seen huge success so this could spell a big win fall for the developer. In the mean time they have released an exciting new original pokie titled Asgardian Stones. In this pokie players must match ancient stone faces representing the Asgardian Gods of myth.

At first it doesn’t sound too visually appealing and in fact this pokie’s backgrounds are quite plain, even though very atmospheric, but once you see the imposing giant stone faces here you will really appreciate what NetEnt has done with the graphics. The look is completed by the eerie glow coming from the bottom of the reels, taking the atmosphere that the game creates to the next level.

NetEnt have included enough bonus features to push the RTP if this pokie to a respectable 96.31%. The reels are quite simple with a standard 5×3 grid representing the action and 20 paylines to activate, starting from 0.2 per spin. Players can however make wagers of up to 200 per spin making this a great pokie for players who prefer high risk action. There is a giant 200 000 jackpot for players brave enough to take on the max bet challenge.

Asgardian Stones features standard reel symbols as well as 2×2 and 3×3 giant symbols blocks that can appear during the base game and the free spins round. Whenever you form a standard win, the matching symbols will disappear and those above them will drop in to fill their place, but when a combination with the giant symbols are formed, a even bigger opening forms for more symbols to drop in.

When one of the symbols falling in to a fill an open gap is a colossal symbol, it will drop all the way to the bottom of the reels, crushing the blocks beneath it. Each block crushed adds a multiplier to your wins.

There is also a free spins bonus game which is powered by the bonus wheel feature. You must spin this wheel to determine how many free spins you get. Up to 15 are available along with the addition to the reels of special colossal wilds or even an up to 2000 cash prize.

Asgardian Stones is a great pokie from NetEnt which deserves players’ attention. The great looking statues of the gods look great on the reels and even though the look may appear plain at first, it is all part of creating a unique atmosphere. Do you dare wander in the valley of the Gods?