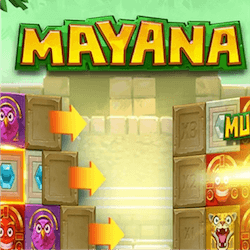 Mayana is a colorful and exciting new Pokie from developers Quickspin. The Mayan theme has been used many times before and has become quite stale but Mayana promises to buck that trend. It may have a familiar theme but it is done in a quite different way.

Where other Mayan based pokies either took a very serious tone or focused on treasure hunting, Mayanas takes a much more cute approach. Mayanas is set to be released this month and other than the look of the pokie, it includes some unique mechanics that really adds to the replay value.

This unique approach to the paylines gives the game a serious sense of progression. You will feel like you are working your way towards massive wins. That massive win you will be working towards is the over 13 000 coin jackpot that Mayanas features.

If a third wining combination now lands, the reels will expand to their full 3×5 size. During your third re-spin a 3x multiplier will be active for truly massive potential payouts. Instead of 27 paylines, a 243 ways to win system will now be active.

As a final cherry on the cake, Mayana features a random multiplier bonus at the end of your spins. You will need to uncover all the reels first and the feature will then trigger randomly. It is called the Mucho Mayana bonus and it will apply between 4x and 20x multipliers to your win.

Mayana is a great looking pokie that does enough new things to an old theme to make this pokie well worth playing. The re-spins feature makes up nicely for the lack of a Free Spins round. Mayana will be released before the end of October.