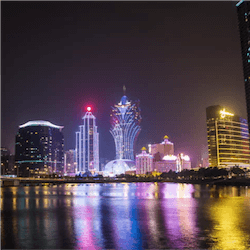 Despite a long running government crackdown and increasingly strict regulation, the gambling Mecca of Macau has seen a strong rise in revenues this year, both from mass, casual gaming and high stakes VIP gaming.

There is a persistent idea that the Chinese mainland government prefers mass gaming for locals and tourists rather than VIP gaming which often leads to rich and well connected patrons transferring money overseas using junket promoters to move the funds quickly and relatively anonymously.

Mass gaming on the other hand exists in what is known as the Virtues Circle. This term basically means that with mass gamblers there is a lot of growth around the casinos since these gaming tourists will help grow the local economy by going out for meals, renting rooms and going to shows.

By contrast, VIP gamblers will stick to their gaming tables and will often receive their meals and rooms comped. For example in Las Vegas, 68% of the casino’s revenue comes from non gaming related activities.

Growing All Aspects Of The City

Both Macau and mainland China have 5 year plans for the region to help diversify its amenities to become more of a tourism and leisure destination than a gambling haven. This plan has worked with Macau seeing a marked drop in VIP players, but this year the high rollers have been making a comeback.

In 2011 VIP gambling made up 70% of casino revenue in Macau. This year it made up 48% of the total revenue. It represents a decrease in revenue of nearly $15 billion dollars. That said, VIP expenditure has shown a stunning 30% growth in the second quarter of this year alone which could be foreshadowing future growth.

The Drivers Of The New Revenue

It is not yet clear what has driven this rise. China has had a massive crackdown on the industry by for example limiting the use of mainland Chinese bank cards in Macau, facial recognition and identity scans at Macau ATMs and the removal of illegal UnionPay systems that aid money transfers. The continued use of junkets has amazingly avoided the Chinese government’s attention.

There were junket closures after a 2014 and 2015 scandal that cost the government billions, but they seem to have quietly started up their businesses again and are still facilitating international payments and transfers.

David Bonnet of holdings company, Delta State, said that the government is only after money laundering and money that comes from the criminal underground or hot money as it is known. So far the junket operators have been keeping things above board.