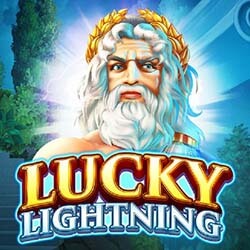 The creative minds at Pragmatic Play have quite the selection of new online pokies coming up for release over the next few months. First up, and due for release in June, is a game co-developed by independent studio Wild Streak Gaming, titled Lucky Lightning.

Featuring a theme based on the life and times of the Ancient Greeks, the new title promises to unleash the full force of the ancient deities as they help create potentially big wins for players’ enjoyment.

On the game area, players will discover 5×3 reels and 243 fixed ways to win – and with a top Jackpot of a whopping 10,000x the wager thrown into the bonus mix too. More bonus features include a Free Spins round, Double Wild Respins, and a Growing Reels mechanic boosted by extra Wilds for maximum wins.

A fantastic inclusion is the Growing Reels mechanic, which will, following wins, at random intervals enlarge the game area from 5×3 reels all the way up to a potential 6×3 in size. There’s also a possibility of enlarging the grid so as to boost reels 3 and 4 in such a way that 4 symbols are accommodated on each.

The Wild is represented by a Lightning Bolt fashioned out of pure gold. Acting as a substituting symbol, the Wild will only appear on reels 3 and 4, but still makes for a great win-making addition to the title.

Money symbols are also worth looking out for, as these will turn instantly sticky when landed simultaneously with Wilds on reels 1 and 2.