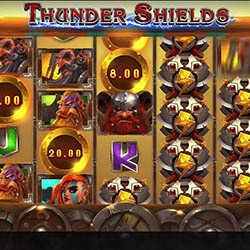 iSoftBet’s upcoming new Thunder Shields pokie promises all the same fast-paced action we’ve been enjoying from the leading studio’s Hold & Win series of pokies so far. Thunder Shields is due for release in November.

The 5×4 reels features 40 paylines, Wilds, Multipliers, Modifiers, Respins, a Jackpot of up to 4,035x the initial stake, and a not-too-shabby 96% RTP for the ultimate win.

The game’s highlight feature is the Colossal Respin feature. Triggered by the presence of substituting Wilds, the bonus feature will combine the first to columns on the grid, after which a Respin will be instantly triggered. The newly formed Colossal area will at this point appear in the form of a single oversized symbol. In the event that a Wild happens to put in an appearance during the awarded Respin, the feature will automatically continue by adding yet another additional reel to the by-now giant game area.

Another impressive feature to have been included in iSoftBet’s impressive new pokie is the Mystery Spins feature. Once triggered at random, the Mystery Spins bonus feature will award the player with one or more special spins. These special Mystery Spins will transform all Mystery symbols into a single type of symbol, with the potential of enormous wins being in the offing.

Thunder Shields’ theme is a refreshing one and a storyline we haven’t come across for quite some time. Viking warriors and their majestic war-time ships are the ultimate stars of iSoftBet’s latest pokie show. The warring Viking battalion is joined by lower-paying royal symbols as they make their way across the raging seas.