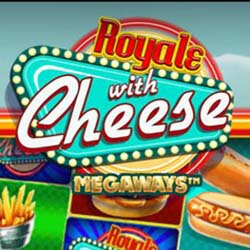 Foodies and fans of the All-American diner culture will go crazy for iSoftBet’s upcoming new pokie. Due for release early in 2021, the gaming powerhouse’s new Royale With Cheese Megaways release will feature Big Time Gaming’s invention of the year – along with several more super bonus features and opportunities to win.

The signature Megaways system gives the player a starting setup of 6 reels with space for anywhere between 2 and 7 symbols a piece. Once fully expanded, the game area will feature as many as an incredible 117,649 ways to win (pay-ways).

Bonus features and special symbols have been added aplenty too – including Wilds, Scatters, a Free Spins bonus round, Mystery Symbols, and the Cascading Reels mechanic.

The Wild Logo acts as a substituting symbol, and will only ever appear on reels 2, 3, 4, and 5. Representing the Mystery Symbol is the pokies’ own Logo emblem. Once landed on the reels, Mystery Symbols will instantly transform into a single randomly selected regular symbol, making for potentially rewarding match-ups.

The theme is a super-looker too, with a classic American Diner featured in the background. As for the symbols, delicious mealtime snacks make regular rotations on the reels – including Hot Dogs, an Ice Cream Sundae, French Fries, and, of course, Royale with Cheese.