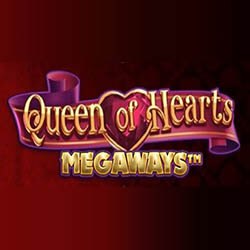 Queen of Hearts Megaways is themed on the evergreen tale of Alice in Wonderland, a book written by Lewis Carroll. But instead of the game being themed around the exploring and rabbit-hole-crawling Alice, iSoftBet’s upcoming new pokie finds its inspiration in a different character altogether; the foul-tempered royal, the Queen of Hearts.

Thankfully, Queen of Hearts Megaways pokie is quite the opposite of a bad-tempered monarch, and is in fact perfectly agreeable and giving. This is clear from the 37,500x top bet-multiplying jackpot that can be won. The game’s volatility rating may be high, but it certainly makes up for this in terms of potentially life-changing wins.

Special features and symbols include respins, multipliers, free games and mystery symbols. All wins are paid from left to right, and given just a smidgen of luck, it’s possible to unlock up to 117,649 Megaways.

Wilds only ever appear on the 4 columns at centre-stage on the grid, but this too is made up for by the developer, and in the form of several Mystery Cheshire Cat showing up at random intervals before transforming into perfectly matching symbols.

The pokie’s special Free Spins feature will trigger anything between 12 and 27 free games. These are activated by the simultaneous appearance of between 3 and 6 scatter symbols.

Also, since bets start out from as low as $0.20, everyone’s invited to the magical Megaways party.