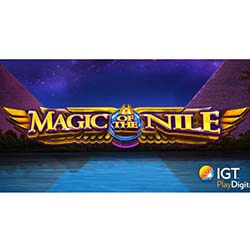 Ancient Egypt-themed pokies remain a firm favourite for many a player – and new from IGT this month is one of the most colourful we’ve seen to date.

Magic of the Nile features a standard reel-setup of 5 reels and 3 rows – with 30 active paylines for landing potentially big wins. Also included in the mix are several special bonus features – including a special Free Spins bonus game.

If anything, magic is at the heart of IGT’s latest big creation – with wins of up to an incredible 25 million in-game credits being made possible by the maximum bet of a cool $7,500.

Symbols include all the classic old favourites: a dog, cat, female Pharoah, male Pharoah, and a classy set of royal playing cards. On the special bonus symbols end of things there are Wilds, Scatters, a 2x Multiplier Wild, and a special Bonus Symbol represented by a pyramid. A secondary bonus symbol meant for triggering Modifiers is represented by an Ancient Scarab symbol.

The bonus symbols are a crucial instalment as they trigger several special features. Depending on the number of symbols landed from a single spin, the Pyramid symbols will trigger between 8 and 12 free games every time they’re landed. There’s also a Scarab symbol for triggering random numbers of in-game Modifiers for additional cash payouts.

Massive wins are possible owing to the inclusion of 2 separate varieties of Wilds and 3 types of in-game Modifiers. These make of IGT’s Magic of the Nile a pokie not to be missed.