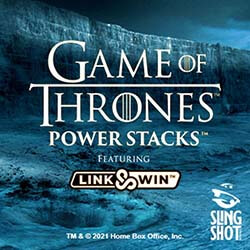 The online gaming industry has come to life as the news of the new Game of Thrones pokie continues to spread. The Game of Thrones Power Stacks pokie comes to us as a collaborative effort between Microgaming, Slingshot Studios and HBO. This has given rise to a game that truly embraces Westeros and resembles the world shared in the series.

A select few have been given access to the game as part of the initial release. So far, the game has been well received and operators are excited to receive the game once it has officially been launched. The game falls under the fantasy category and features a medieval, middle-ages inspired theme.

If you are unfamiliar with the book and show, Game of Thrones is a fictional story set in Essos and Westeros. It follows the journey of noble families fighting for their claim to the Iron Throne. The game takes place on a five-reel, four-row setup and features 40 pay lines to increase the odds of winning with a maximum win of up to 25,000x the stake. The player return rate is 96.2%.

Slingshot Studios and Microgaming’s exclusive partnership sets out to deliver industry-leading content the gaming world has never experienced. Slingshot Studios is renowned for its innovative pokies and saw its reputation improve by partnering with Microgaming. African Legends was one of their first releases and has already delivered some impressive rewards and wins.

In light of this, their latest collaboration includes the all-new Power Stacks feature which will be used to increase player rewards.