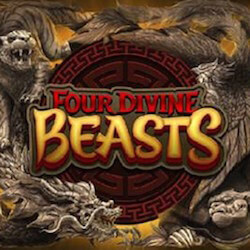 Habanero have delivered something quite surprising with their latest pokie, Four Divine Beasts. The graphical style and theme is quite unusual for this developer who has made some great progress with their pokie design in recent months.

It takes its theme from famous creatures from Asian mythology, the Tiger, the Tortoise, the Phoenix and the Dragon. The graphics of the reel symbols, background and win effects are beautiful to look at, to put it plainly. The incredible detail, rich colour palette and understated effects makes this pokie a standout title for Habanero.

This developer has produced some great titles in its life but Four Divine Beasts certainly stands in a class of its own. The Four Divine Beast from the pokie’s title makes up the highest value symbols in this game. They can pay out jackpots that range between 200 and 500 but the biggest in game jackpot totals 300 000.

Even though the small 5×3 reel layout would work perfectly well with paylines, Habanero has instead used the player friendly 243 ways to win pay system. The varied bonus system included here is rounded out by the inclusion of full HTML 5 compatibility from Habanero, making Four Divine Beasts a potential smash hit for the developer.

Getting Started On You Bonuses

There are four bonus types available to players of Four Divine Beasts. They are unlocked by landing three of the Yin Yang scatter symbols on the reels along with one of the four Divine Beast symbols, either the Dragon, Tortoise, Phoenix or Tiger on reel 1.

The dragon bonus feature gives you 7 free spins and a special tree wild symbol that appears on the reels on every spin and can also expand along the reels when it lands. The wild landing on the first three reels will also add another free spin to your remaining spins. The dragon icon can also randomly trigger a respin feature during the base game with the same features activating.

The Phoenix icon awards 7 free spins if it triggers the bonus feature, but now horizontally expanding flaming wilds will appear on the reels during your free spins. As with the Dragon symbol, the Phoenix can randomly award re-spins with exploding wilds appearing on the reels.

The Tiger And The Turtle

The white tiger bonus feature will award you with 7 free spins and special sticky wilds will appear on the reels that move one position to the right after each spin. The white tiger can also randomly trigger a respin feature where the same rules apply during the re-spins.

Finally there is the Black Turtle Feature which will award you 7 free spins with special blue expanding wilds that also appear on the reels. This symbol will also randomly trigger a special respins bonus during the standard game.