Fight Off The Undead at MGM Grand Hotel & Casino! 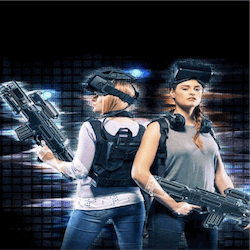 According to the MGM Grand Hotel and Casino based in Las Vegas, we should ready ourselves for an invasion of the undead! The casino has recently announced that players will be able to earn monetary rewards if they are able to defeat invading zombies in a pioneering free-roam Virtual Reality, VR, game lately developed by Zero Latency.

Trying to Catch the Eye of Millenials

The new game is aimed at taking skills-based gaming to never-before-seen heights. These types of games have become very popular in casinos worldwide as they keep trying to attract, and keep, the attentions of the generation known as the Millenials.

The new game, which needed over 185 square meters of space in the MGM Grand’s latest Level Up game lounge, will launch on September 8. There will be three different gaming options available for players to choose from, each 30 minutes long.

The first will see a maximum of eight players moving through an interactive arena space that will create an apocalyptic, post-zombie world. Players will be armed with weapons able to destroy the brain-eating zombies while restoring barriers that have been shattered.

Engineerium is the second option, and will put players in the middle of a world inhabited by magical creatures like whales that fly. Players will take their places on floating platforms and be asked to solve puzzles based on physics problems in order to advance.

The third option is named Singularity, and takes place inside a secret space station for military research. Players will need to move through it whilst destroying robots and drones.

The third option, Singularity, is set in a secret space station that focuses on military research. In this game, players need to move through the space station and destroy drones and robots.

The Game Set to Take Place in Open Spaces

All of the enemies and obstacles in the game, including zombies, robots, drones, and more, will be encountered by players as VR. The physical space in which the game will unfold features zero barriers of any kind! Everything that players will hear and see will be transmitted by means of high-tech wireless goggles and wearable computers. In the multiplayer game option, players will be interacting and communicating with each in the form of Avatars, which will be chosen before the game begins.