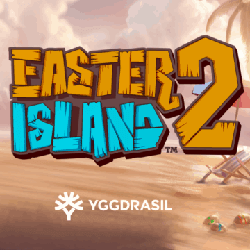 Yggdrasil’s new Easter Island 2 pokie is all about celebrating the holidays in true tropical island-style fashion. The Maoi statute characters in the sequel embark on a holiday to sunny Venice, where they encounter all manners of adventures on their journey.

The duo of quirky stone characters are more colourful than ever before, making their shenanigans on the reels. Their antics are entertaining and will certainly appeal to new players as well as fans of the first release in the popular Yggdrasil series of pokies.

A recurring feature included once again is the thrilling Respins Symbol Swop feature, which is bound to be to the great delight of those familiar with the first release. What has however changed, is that the maximum jackpot amount has been increased considerably, which is a grand touch indeed.

Also different is that an additional reel has been added to the setup. The number of paylines have however been kept at the original tally of 25.

The Wild symbol again steals the show, especially since it will this time around only appear during the Respins Symbol Swop bonus feature. The feature is triggered every time a winning combination of symbols have been landed on the reels, after which one Respin is awarded per winning round.

A winning touch also is that whenever a Respin has been activated by more than 3 matching symbols, the grid will expand so as to include a Colossal Symbol and an expanded 4×4 grid.

All in all, players can expect to see yet another phenomenal game coming from Yggdrasil.