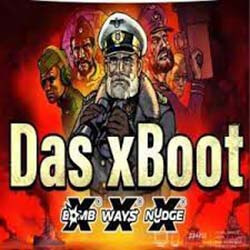 Nolimit City is sending a new online pokie title into the ether this month. Coming soon from the award-winning developer is new game called Das xBoot, which was obviously inspired by the German cult classic film Das Boot.

The game area consists of 6 reels and pay-ways numbering up to a max total of 75,712. Also included in the mix are several bonus symbols and features. These include Wilds, Scatters, and Multipliers.

The pokie features the same characters as those starring in the film, with the themed character icons including the Doctor, Chef, Mechanic, Signaler, Captain, and Lieutenant. The themed symbols are the higher-value ones and are joined on the reels by a suite of lower-paying royals.

The game area is expandable. This is achieved by landing the Silver Medal xWays icon, and is great for opening up the space to land additional combinations. The more pay-ways added to a game area, the more symbols appear at any given time.

Also making a feature appearance is the xNudge mechanic. Triggered by the Golden Wild, the mechanic functions by acting as a Wild that spans four rows high – meaning more winning combinations on more paylines.

Another exciting inclusion is the Mine Bomb Wild. Whenever it lands anywhere on the reels, it will instantly remove all non-winning symbols appearing in view at the time. This means Wild-inspired combinations for those symbols already part of a winning selection.

Nolimit City’s new Das xBoot pokie is a game with a twist while offering many ways to win.