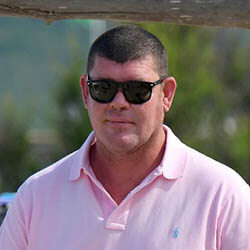 Tycoon James Packer was recently in Sydney inspecting the progress of the Crown Resort Integrated Casino Resort, worth AUD$2.4 billion, and took some time to let reporters know how much better he’s doing.

He resigned from the company he founded in March 2018 due to issues with his mental health and additionally stepped away from Director positions on 22 Boards. He’s essentially left not only the business world but public life overall. Packer was happy to report that, although he’s very satisfied with his life now that it’s quieter, he was eager to see the Crown Sydney Resort’s progress in person.

The 52-year old billionaire surveyed the Barangaroo-based casino resort with his mom, Roslyn, and girlfriend Kylie Rim, a 38-year old model born in Canada in tow. Packer and Rim became an item after his engagement to Mariah Carey was called off by the singer, and the businessman reveals that Lim played a big role in his rescue. The acclaimed biography The Price of Fortune: The Untold Story of Being James Packer goes into more detail about their relationship.

The Crown Sydney is set to become the third integrated resort owned by the gaming and entertaining group, joining the Crown Melbourne and Crown Perth. It’s going to feature the tallest building in the city, 75 floors, as well as its first-ever 6-star hotel. There will be 350 rooms available and the casino will only be open to guests and members. Construction is set to be completed by the end of this year.