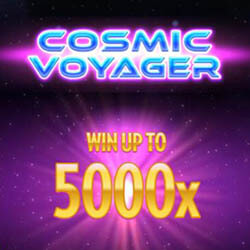 Coming new from Thunderkick this January is a superb new online pokie with a strong sci-fi storyline. Cosmic Voyager tells the story of alien travellers making their way across the universe in search of power and fortune.

The 5×3 grid appears to be hanging against a backdrop of stars and planets by an invisible thread connecting the reels to the background. Featuring a distinctly adventure-style theme, the game appears to revolve around a powerful god-like character donning a mask of pure gold.

Included among the special features and symbols are Expanding Symbols, a Cosmic Voyager Wild featuring the game’s logo and which symbol also happens to double up as the bonus Scatter symbol, Stacked Symbols, and a Free Spins bonus game. The maximum payout is fixed at 5,000x the player’s original bet wagered.

In order to trigger the Expanding Symbols feature, the player must first land a fully Stacked Symbol on the first reel. Once landed, the Stacked Symbol will instantly activate an expansion of all matching symbols on their respective reels in such a way that entire reels are covered.

The Wild Logo will substitute for any of the other symbols featured in the game. Once simultaneously landed in combinations of 3 or more, the Wild symbol will instantly turn Scatter, and the Free Spins feature will be triggered. 10 Free Spins will be awarded every time the free games feature is triggered.