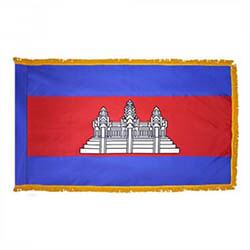 Cambodia is resolute regarding its complete ban on online gambling. Hun Sen, Prime Minister of the country, has confirmed that they will not be backtracking on this decision, saying that this activity has become more of a burden than an advantage.

Authorities have now begun inspecting gambling facilities with licenses to check whether they will continue offering internet-based real money entertainment. Earlier on in 2019, it was decided not to issue any more licenses to do so.

This move has left over 8 000 Cambodian nationals without work, with staff in casinos in the Preah Sihanouk province having lost their jobs after the total closure of online gambling operations ordered by the government.

Speaking to VOD Khmer, a local news outlet, Yov Khemara, Provincial Director of the Ministry of Labour, said that four casinos have had their operations shut down completely. An additional 23 fired all their employees excepting security personnel and 33 other venues have temporarily suspended their workers. A total of 73 venues were operating in the province, says Khemara.

He explained that certain people had sought out work in this sector because salaries were better than those offered in the garment industry. When these casinos close, said Khemara, some of these people will return to the garment sector while those without the necessary experience will have to return to their homelands. Khemara added that more than two-thirds of the Chinese living in the region involved in the gambling industry have left it since the ban was begun.