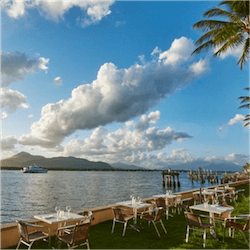 State owned waterfront property in the city of Cairns will be turned into a brand new tourism investment.  International developers have pitched plans to the government to create a new tourism hub in Cairns that will feature luxury hotels, apartments, top class stores along with a casino.

The plans were reported on Friday. Curtiss Pitt, the Cairns City Treasurer joined a group of government delegates who announced the plans to the city. There had been numerous projects pitched by international developers wanting to sink money into the region and Pitt saw the perfect opportunity to create a tourist draw as well as numerous new job opportunities for the community.

At the moment, only the formal Expression of Interest process has been started. Further information will be released on the project in the next 6 weeks after which development plans can be submitted for the project that is projected to be worth millions of dollars.

This new development follows in the footsteps of the Queens Wharf development project, which will feature a similar combination of retail amenities, tourist attractions and casino gaming. Pitt downplayed the role of the casino in the development stating that the project should be viewed as a whole package instead of individual facilities and amenities.

Minister of Tourism for Queensland, Kate Jones reiterated the government’s commitment to the state of Cairns and said that developing the regions tourism industry further is of utmost importance. Currently the local tourism industry is worth more than A$25 billion and provides employment to more than 200 000 locals. The development of this tourism hub will help cement this booming industry in Cairns.

The Reef Hotel Casino is only a few blocks away from the proposed development but the government has already stated that the existing venue will be incorporated in some fashion and won’t be forced out of business due to the new project. This certainly is exciting times for the region.

Cairns’ tourism industry has become the lifeblood of the region and this new development will enrich the state greatly, making it a must see destination. Cairns is hoping to generate the same sort of buzz and support that the Queensland Wharf project has drawn since its inception. It is still early days for the project but as new development pitches are made public, more and more investors are sure to flock to the region.