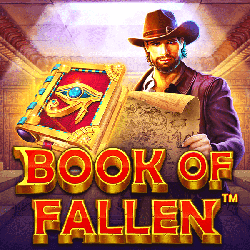 There’s a super new adventure-style online pokie coming from the creative forces at Pragmatic Play this month. Titled Book of Fallen, the game puts an exciting new spin on an Ancient Egypt-themed title.

While we’ve seen many “Book Of” games released over the years, there’s every once in a while a title that seems to stand out from among the rest. And with several unique offerings in the mix, Pragmatic Play’s new title promises to be one of those rare and unique finds.

The action takes place on 5×3 reels and 10 always-on paylines. There’s lots to play for, including a super 5,000x the bet Jackpot kitty, which means it will be possible to bank a humungous $500,000 in cash prize money from a single rotation of the reels.

Not unlike most titles in the Book of series of pokies, the Wild and the Scatter share a common symbol. When acting as a Wild, it will substitute for all regular symbols. But it plays another role also, as it’s also the key for unlocking the Free Spins bonus round. Landing 3 or more simultaneously caries a 10 free games reward.

Once the Free Spins feature is in play, players are allowed to opt in on a special Expanding Symbol which may be purchased for 10x the value of the basegame wager.

Themed symbols include Pharaoh, Anubis, an Ankh, and the leading character, John Hunter himself.