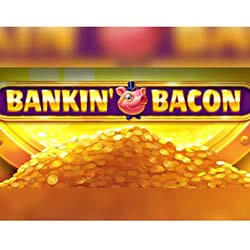 While piggies have traditionally been portraying bankers in the world of online pokies, Blueprint Gaming’s Bankin Bacon pokie trumps them all on the originality front.

Due for release this October, Bankin Bacon is played on a game area that consists of 6×4 reels and a cool 4,096 ways to win. Bonus features include a Bank Collector mechanic, Banker Spins, which is the game’s version of a free spins bonus round, Wilds, Scatters, and even a progressive Jackpot.

The combination of medium volatility and a progressive Jackpot immediately drew out attention. The game will include a premium version that forms part of Blueprint Gaming’s Jackpot King network of online pokies, which makes the release even more exciting.

The Wilds will be Piggy Banker symbols, which will, when landed together with special Cheques during a single game-round, also act as the means with which to cash the instant prizes. Cheques symbols are worth up to a cool 10x the wager each.

The free games round is the Banker Spins bonus game, which is activated by landing Piggy Coin Scatters on reels 3 to 6. Once triggered, the player will get to spin a special Bonus Wheel for deciding the number of free games awarded. Up to a staggering 50 Free Spins can be won from triggering the special bonus feature.

The game is fun to play, and even more so thanks to its cartoon-like design and graphics. Symbols include Piggy Coins, Piggy Bankers, Gold Coins, Cheques, Money Scales, and a suite of royals from 10 to A.