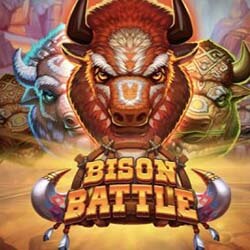 Award-winning studio Push Gaming has released an exciting new pokie featuring the majestic Bison. Titled Bison Battle, the game is every bit as high quality as every other title we’ve seen by the studio.

Inspired by Native American culture, Bison Battle is played on 5×4 reels and 20 paylines. Though a simple setup, Push Gaming’s latest pokie is far from standard. Not only does it feature an impressive selection of bonus features, but also a top Jackpot of up to an incredible 50,000x the wager.

Wild symbols dominate the game. Landing often, they act as replacement symbols for replacing regular icons. They go a long way towards creating additional wins that would not otherwise have been had.

The Bison is the Scatter and star of the Bison Battle pokie show. Several types of Bison Scatters have been included. These are responsible for the 3 different types of main bonus features: