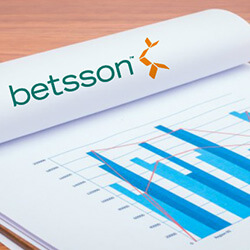 Online operator Betsson has reported year on year growth for revenue and gross profit for 2018 due to a record performance by the company in the fourth quarter.

Group revenue for the 12 months leading up to the end of December accumulated at $581.9 million, which is an increase of 15% as compared to the previous year. Betsson has explained that the increase is due to growth in its casino products in both Western Europe and the Nordic markets.

Overall revenue for the entire year increased by 19% from 2017, while their sportsbook revenue also saw an increase of 6%. Higher revenue has also helped the operator push their gross profit up from 2017 to a total of SEK3.68 billion, up from SEK3.412 billion previously. Operating expenses also increased from SEK2.54 billion to SEK2.67 billion due to additional staff costs. Personnel expenses also saw an increase to SEK813.9 million, up from SEK786.4 million, while their marketing expenses rose to SEK994.5 million.

Despite the higher expenses, the group was also able to report a healthy operating income of SEK1.12 billion, an increase from SEK882.2 million. The operator has also noted a rise in EBITDA for the entire year, with the amount at SEK1.51 billion, up from SEK1.15 billion from 2017, meaning that their EBITDA margin is now 27.8% higher. Pontus Lindwall, CEO of Betsson has said that for the third consecutive quarter, the operator has delivered high revenue and EBIT, proving 2018 to be the turning point.