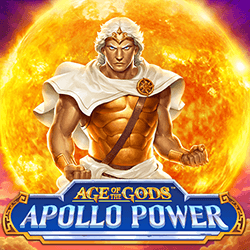 Apollo Power is a fresh casino game in a series called Age of the Gods, which is currently the main selling point of Playtech’s offerings at the moment. The game, which has its own progressive jackpots, offers a combination of different characteristics and gameplay styles to go along with its theme of ancient Greek mythology. Apollo Power will offer players 6 reels and 50 active rows, so it’s quite distinct from standard machines. The pokie comes with a total stake of up to 1,000x ($500,000) in addition to the Age of the Gods ‘ new jackpots. The Apollo Power Respins and two variants for the wilds are on its list of bonus features.

Apollo Power appears to reward a fair amount, especially when considering its Respins and how many wilds can be brought on to the reels. These wilds are going to receive the highest prizes for the game, up to 1,000x, so the player can earn as much as $500,000 in one round through them. There are four progressive jackpots to be earned, all of which can land at random.

Ultimate Power can win over $250,000, while Extra Power, Super Power, and Power have fewer benefits. The pokie boasts a limited number of features, but the impact of each on the game can make a big difference. It’s also a 6-reel pokie, so it can be hard to get 6 icons lined up on a row instead of 5 from a standard game.