America In Shock After Vegas Massacre 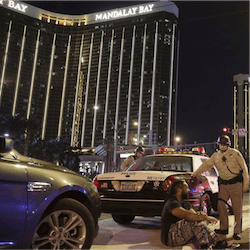 Authorities are baffled as to the motive of a shooting spree that has cost 59 people their lives so far and left 527 others injured. Late on Sunday the 1st of October Stephen Paddock, a 64 year old local, opened fire from his 32nd floor hotel room at the Mandalay Bay.

It appears that his fire was directed at the Route 91 Music Festival that was being held across the road from the hotel. There have been horrendous scenes posted online by witnesses at the shooting. The entire Vegas Strip was tossed into a panic as the gunman emptied clip after clip.

The fact that the shooter had such a high vantage point resulted in mass confusion as people were unable to figure out where the shots were coming from as the gunshots echoed around the strip. The ordeal only ended after the gunman took his own life. So far the reasons behind the massacre are still unknown.

The incident has opened old, divisive wounds in America regarding gun control laws. This marks the deadliest shooting in a little more than a year, after 49 people lost their lives at the Pulse Nightclub shooting in Orlando last year.

It is unclear whether the shooting is being treated as a terrorist incident. When the police raided Paddock’s hotel room, they found multiple guns in his room along with two suitcases. When they went to raid his home, located in a retirement community a few miles outside o f Las Vegas, they found more weapons, explosives and ingredients for making home-made bombs, along with electronic detonators.

The police investigated Marilou Danley, 62, who was seen traveling with Paddock before the shooting, but now it has been confirmed she is out of the country and had no involvement in the shooting. This marks the deadliest mass shooting on American soil since 1991.

Online tributes and personal accounts have poured in, with many witnesses recording the events on their Smartphones. This tragedy has shocked the American people who have seen wide scale civil unrest in recent months with police shootings and Neo-Nazi protests gripping the public’s attention.