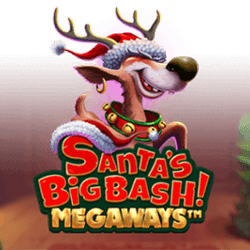 Iron Dog studios enters the season with an exciting gift for their players as they released their new Christmas-themed game: Santa’s Big Bash Megaways. We’ve seen a continuing trend of more iGaming publishers and developers releasing their new titles a little earlier with every year, but it also gives players the chance to jump on board with the latest games as they prepare for the festive season.

Santa’s Big Bash Megaways is the newest pokie from Iron Dog Studio, and sees the popular and innovative Megaways mechanic integrated nicely with a game that focuses on Christmas and the holiday spirit. It’s one of the latest IPs to be released on the market, and players can expect the game to take place across six reels and seven rows.

Iron Dog Studio’s new pokie offers 117,649 different ways to win as part of the Megaways series of games, with a potential win rate of 25,000 times the amount that’s wagered, and a return to play of 96.04%. It’s a 6-reel pokie that comes complete with random events, wilds, free spins, locked reels, multipliers, and wilds, all set with in a Christmas theme, with the added bonus of re-triggers. Players can trigger free spins when they activate at least 8 baubles hanging from the Christmas tree, with each subsequent win activating a single bauble.

It might just be one of the most exciting games released by the studio, and a perfect pastime to enjoy during this upcoming season.