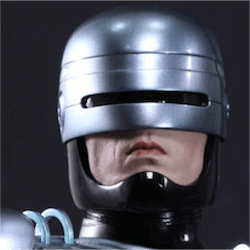 To describe Playtech as an industry leader in the world of casinos and gaming, and specifically pokies, would not be overreaching by any measure.  The world’s leading online pokie developer’s latest endeavour comprises of having teamed up with Metro Goldwyn Mayer’s MGM Interactive.  The result:  a fully branded pokie based on the 1987 sci-fi cult classic, RoboCop.

Despite the movie having undergone a re-make in 2014, many die-hard fans still prefer the original 1980 version – believing it to capture the true essence of the original idea and brand.  It very quickly becomes apparent that Playtech too, had exactly this in mind when developing the pokie.

All of the signature trademark characters have been included and fans will quickly recognize the likes of officers Anne Lewis and Dick Jones and ruthless criminal Clarence Boddicker, to name but a few.  Suffice it to say that RoboCop himself makes a star appearance among the pokie’s symbols as well.

The action is played out over 5 reels and 25 paylines – and has been designed to be compatible with both desktop as well as mobile devices.

The Base Game: Special Features

Playtech’s RoboCop is jam-packed with special features – in the base game as well as during the special bonus rounds.  The base-game features tally to four in total and are randomly activated.  These include the Shootout Spin Feature, the Robot Attack Spin Feature, the Line-Up Spin Feature and the OCP Bonus Feature.

Wild symbols are periodically dispersed across the reels, with an enlarged wild symbol making an on-off appearance just to spice things up.  Two multipliers are also in the mix, as well as various cash prizes that are triggered by the symbol-pick special feature.

The Special Bonus Round

Playtech Casino Director James Frendo hit the nail right on the head by proclaiming Playtech’s newest creation to be a game that stays true to the original film.  The cartoon style graphics, especially, echo the original feel of downtown Delta City and the 1987 Detroit Police Department.

Any lover of movie-themed pokies will thoroughly enjoy Playtech’s RoboCop.