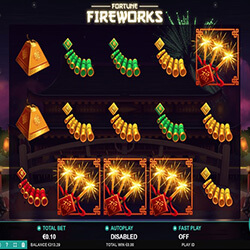 Fortune Fireworks is the latest online pokie from Leander Games, and will transport players to the celebrations of the Chinese New Year with incredible graphics and gameplay that focuses mainly on the fireworks.

The game consists of 5×3 reels and 10 active paylines, and the player has the chance to potentially win as much as 250x the total stake, and more if multipliers are triggered. The RTP is sitting at 95.98%, and the pokie comes with plenty of extra features, including Exploding Wins, wilds, and a Wild Blast.

The Wild symbol is among the symbols that will land the most often, and while it can be used as the usual substitute for all other symbols in the game, it can also complete its own winning combinations, with five wilds on a single line awarding the player with 250x the total stake. The game also makes use of a cascading mechanic, which they call Exploding Wins, where winning symbols explode and are replaced with new symbols that take their place; and this can be done almost indefinitely under the right circumstances.

Blast Symbols are formed when icons with Firework land on the same row where the transform into a single Blast Symbol. If a scatter lands next to it, the Blast Symbol explodes and gives the player a number of wilds across the reels. If the wilds land on Blast positions, they can explode and add 1x multipliers automatically, meaning that the more wilds that land, the higher the total multiplier amount.