New Curse Of The Pharaoh Online Pokie By Evoplay 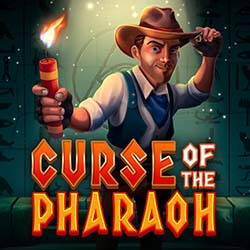 We’re always excited to see a new online pokie from the developers at Evoplay. Their latest title, which has just been released by the award-winning developer, is based on the lives and times of the Ancient Egyptians, which makes the release only that much more exciting.

Curse of the Pharaoh is played on 5×3 reels and with 20 fixed paylines for accumulating wins. On the winning end of things, there’s also a top Jackpot of a crazy 2,800x the player’s wager, which makes for quite a bit of money considering the pokie’s maximum bet of a whopping $300.

While Ancient Egypt-themed pokies are nothing new as far as themes go, Evoplay’s take on the popular storyline follows a somewhat different approach in terms of its symbols. On the reels, instead of the usual suspects, players will discover a colourful variety of deity icons – including Anubis, Ra, and Bastet. Joining the gods are Egyptian Glyphs, a Wild, and also a bonus Scatter symbol.

The Scatters are what make the Free Spins magic happen on the reels. Landing these in groups of 3 or more on reels 1, 3, and 5 will unlock 6, 12, or 18 free games. What’s more, these are all boosted by a special Multiplier value ranging between 6x and 10x.

While winning free games make for handsome payouts, buying in on the bonus game is also a possibility.

The game has a beautiful and colourful design and is bound to make for hours of engaging online casino fun.